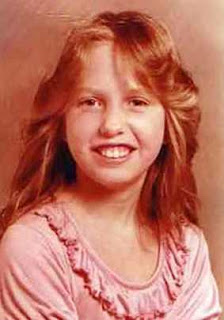 I started 5th grade in 1980 in a new school, Grant Elementary, in Santa Monica.  I was both nervous and excited, worried mostly about whom I was going to play with at recess and eat lunch with.  I had never really had trouble making friends before, and after all, the kids I knew from La Crescenta - well, we had all known each other since kindergarten.  I didn't really have to try and make friends with anyone.

We went school clothes shopping that year - probably one of the last times we ever had new clothes for school.  The BIG THING was designer jeans:  Jordache, Calvin Kleins (remember Brooke Shields?), Gloria Vanderbilt.  They were the kind that were so tight you had to zip them up using a hanger.  Ladies, you know what I mean.  (For years, I could never understand the appeal of "jeans day" at work because as a child of the '80's, they were never comfortable.)  I distinctly remember that at age 10 I weighed 80 pounds.  I was probably 5 feet, I'm not sure.  Mom always remembers me being the tallest in my class until a certain point.  Anyway, I don't know what the "normal" weight of a 10 year old should be but I remember being a little more on the "soft" side (big-boned, remember?), a little chubby - maybe I hadn't lost my baby fat, ha ha.  In looking back at pictures I don't see a fat girl but I definitely wasn't skinny.  Maybe I gained weight once we moved to Santa Monica.  In La Crescenta we ate candy but we didn't have the easy access we had in Santa Monica.  That summer, unsupervised, we would make regular trips to the nearby Lee's Liquor store for candy and whatever random offerings we might find.  Top Ramen was popular and only 34 cents.  I don't remember how we had money, but it must have been in the early days of allowance.  Or sometimes Mom would go to work and leave us money for the day.  Of course, this was before the time when any money left out in the open was subject to being stolen by Direll.

That summer was around the time I really began to eat my feelings.  Everyday was about "what are we going to eat today?"  I found I could comfort myself with sweets, especially if they were all mine, not to be shared with anyone else.  And  no one was policing me.  No one was telling me I couldn't eat something.  If we had ice cream in the house, I would get up before anyone else and have ice cream for breakfast.  It wasn't like anyone else was going to see that I ate breakfast anyway.  Or care.  I tried once to institute family breakfast every morning, but my mom shot me down.  She just couldn't eat in the morning and wasn't about to sit down at a table with all of us and try.

Back to the jeans.  I made Mom take me everywhere possible to find designer jeans in my size.  Actually, finding the size wasn't the problem; it's just that designer jeans fit smaller than other jeans (think Levi's, store brand, whatever).  They were supposed to fit skin tight.  My mom tried so hard to gently convince me I needed "generic" label jeans or, even worse because they just weren't popular at the time, Levi's (what I wouldn't give for a pair of good fitting Levi jeans today!).  I was desperate for something sporting a designer label, especially since I was starting a new school.

Finally, we discovered "Bonjour", a brand that might have been made by Yves St. Laurent - I'd have to research it.  They fit, probably because their sizes were closest to the true size.  And they were made by a designer everyone had heard of.  I was relieved that I wouldn't be left out of the designer jeans craze.  I might not be wearing Jordache or Calvins, but I was wearing somebody identifiable.  (Thank you, Yves. St. Laurent!)  For years, when it came to jeans, I would only wear Bonjour.

I had one pair of jeans.  That was the norm back then, at least for us.  Why did a 10 year old need more than one pair?  I mean, we were leaving the '70's behind but polyester still hung around for a couple of years.  I would wear that same pair of jeans a couple of times a week.  I guess my point is in this whole lengthy montage of designer jean stories is that while I was not a small, waify girl, I was not fat.  Have I said that enough?  It's not that I became body image obsessed.  I just kept running into walls that kept me just outside of feeling normal, of feeling like I fit in.  And it started with designer jeans and Melinda Lee and just continued throughout my teenage years while I ate my feelings and tried to ignore the fact that I was pudgier than other girls my age.
Posted by Shelley Balough at 1:51 PM