Splish Splash I Was Taking a Bath

I slipped in the shower yesterday.  Yes, exactly as it sounds.  I put one foot in the tub and as I started to put the second foot in, I felt the slip.  Straight down I went.  And now I am feeling the pain of a sore back, tailbone and right buttock.  Ouch.  It was the kind of fall that makes you want to cry initially, but I didn't.  I sucked it up and took my shower.

"Splish Splash" is one of the songs my dad used to sing to us as kids.  My favorite was this one: 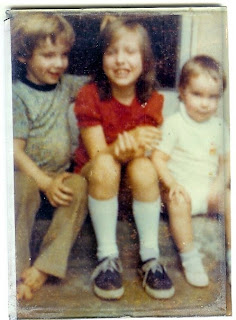 My mom moved out when my parents separated.  She got her own apartment in Verdugo Hills.  We stayed with my dad in our house because he was working full time as a lawyer.  My mom was going to go to school to finish her degree now that she had put my dad through law school.  It was kind of fun that my mom had her own apartment.  Suddenly my parents became these new people.  Mom got breast implants (she had been very flat-chested; for years, I had hoped I had inherited my dad's genes although he didn't have sisters, and I didn't know if boobs ran in his family) and bought two white cushiony love seats for her apartment - not exactly kid-friendly.  She and Dad started smoking pot, although the first time they tried it they were still together, with friends.  They also both started drinking beer.  We started visiting my mother every other weekend at her apartment.  It was only a one bedroom.  Sometimes we all slept in her bed, other times, maybe some of us slept on the cushiony couches.  We were so young, especially Julie, who couldn't possibly have known what was going on.  My mom seemed happier.  She took us to the park.  She seemed good.

At home, Dad worked all day.  Sometimes he would come home in a bad mood.  I remember him folding cloth diapers all the time, as my sister was still in diapers.  I brushed my own hair in the morning whereas before, my mom used to fix it for me, sometimes French braiding it or putting it up in pony tails.  My dad stayed up late at night watching TV, smoking pot and eating sunflower seeds with the shells.  My brother used to wake up at night and would go out and sit with him. 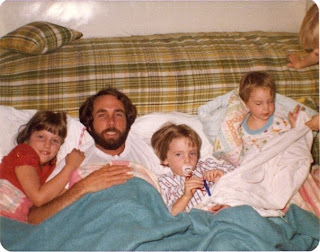 Things had suddenly become hard, worrisome.  I fought with my brother a lot.  I complained when life didn't seem fair.  I had to go to bed at 8:30 when I wanted to stay up until 10 like my friends who talked about the cool shows that started at 9pm.  I got upset one night, crying and complaining about it and called myself "little miss 8:30".  My dad had to keep from laughing, he thought it was the funniest thing, but I was serious.  I wanted to be like everyone else.  In retrospect, I realize that it was the first time - or actually one of the last times - there were actually rules in the household.  Set bedtimes.  Later on, I would wish or regret that I didn't have that in my teen years.  Anyway, Dad compromised and let me read in bed from 8:30-9pm, at which time he would promptly come in and tuck me in.

Now that I think about it, he probably desperately wanted his alone time.  I look back at my mom and my dad and am overwhelmed with amazement at how they managed to be single working parents, how hard it must have been, how hard it is.  You work all day and then have to come home and take care of 3 kids.  There is no "you" time.  So Dad probably couldn't wait for us to be in bed so he could kick back, get high and eat junk food, shut off his emotions and go numb, before he had to go to bed and get up and do it again the next day.  I don't have kids but I sure can relate in a lot of ways.  Later, when things would get really bad, I reacted the same way, not with drugs, but with food and writing and daydreaming, anything to go numb and imagine that life might be different if only. . .

Posted by Shelley Balough at 8:59 AM