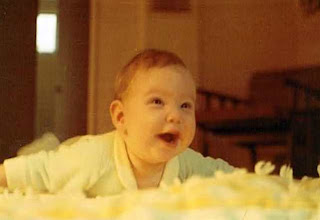 I don’t know how far back I really remember. I know I was born in Provo, Utah on July 29, 1970 and that just a few weeks later we moved to Southern California, somewhere in LA. My dad was from La Crescenta, a suburb in the San Gabriel Valley. I’ve seen pictures of myself as a baby in various apartments or duplexes but the first place I actually remember living in was the house on Stevens Street in La Crescenta.
Maybe my mom was already pregnant with my brother Matthew, or maybe that’s where she got pregnant. Anyway, I don’t much remember living there without him. He was born at home in our kitchen, naturally, in the presence of a midwife. It was 1973. My parents were kind of faux hippies, hippie wannabes, as much as Mormon parents could be. So that’s where the natural childbirth came in. (I, on the other hand, was born in a hospital.)

My overall feeling of my family life was that we were pretty average. I fought with my brother a lot but I think it was normal sibling rivalry. My mom sewed me clothes, cut our hair at home, made meals. I remember that at dinner every night we had the TV pulled into the entrance of the kitchen so we could watch Walter Cronkite say “and that’s the way it is” every night.

My dad was funny. He would horse around with us, liked to make us laugh. One night or maybe morning, we were at the table. I had my elbow on the table, holding my toast in the air and he leaned over and took a bite out of it. My dad was always funny.
I played lots of dress up and make believe. I wanted to be a princess. I was definitely a girly-girl.

I got spanked sometimes. I get the sense looking back of how young and new my parents were. By the time Matthew was born they were only 26 and 27. I don’t ever remember my parents arguing in that house though. 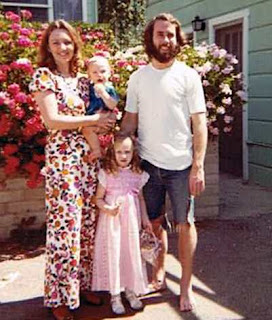 At some point, my dad stopped going to church. He had grown his hair longer and had a mustache and beard. He wore cut off jeans and went barefoot. I don’t remember what I thought about him not going to church. My mom still went and she took me and Matthew. Church didn’t mean much to me. It was just Sunday School and a boring Sacrament meeting where sometimes we got to eat a little piece of bread and drink a paper cup of water. (His body and His blood, the Mormon way.) I do remember playing tag on the lawn with the other kids after services, waiting for my mom or my parents.  Eventually we all stopped going to church but I’m not entirely sure when that happened.
Before I started kindergarten, I went to a preschool. I don’t remember much about it. There was a girl there, I guess, named Michelle Sides. I must have talked about her quite a bit because my dad started calling me Michelle Sides as a nickname. He called me that from time to time into my grown up years.
About late 1974 my mom became pregnant with my sister. As my mom and dad tossed about names, they asked me what I liked. I liked the name Julie Ann because I knew a girl named Julie Ann whose white knee socks always stayed up (mine always fell down). My sister was born on my birthday in 1975. She was born at home, like my brother. A short time afterwards I had my birthday party. As a joke, my dad handed me my sister and said, “here’s your birthday present.” Oh, and they named her Julie Ann.
It never bothered me that we had the same birthday. I thought it was pretty cool. I also never felt the same rivalry with my sister that I did with my brother, but it’s probably because of the age differences and the boy/girl thing.
Those were good times, the time when I was truly a kid with only kid worries. (Reminds me of the song "Kid Fears," one of my favorites, by the Indigo Girls.)  I felt loved, I felt what I would consider now normal in a normal 1970’s family. We watched cartoons on Saturday mornings. I took ballet lessons. We ate dinner together. I had friends on my street. I played dress up and with paper dolls. I fought with my brother, I threw tantrums. I was a normal kid. That feeling didn’t last much longer.
Posted by Shelley Balough at 10:05 PM